Resulted in foreign tours by Dr. Mohamed Morsy president for granting Egypt vacation, Egypt packages, Egypt vacations packages  kiss of life again, especially with the announcement of several European countries and the direction of America to raise the warnings issued about not visiting Egypt, as well as advertising and British Foreign Secretary William Hague for his country’s support for increased investment and tourism in Egypt, The agreement, signed by Foreign Minister Mohamed Kamel Amr on the sidelines of the visit of the President of the Republic of Italy and on bilateral cooperation in the tourism sector during the years 2012 – 2013.
Says Mohamed Essam El Din Abbas Atta member of the Tourism Committee Association Egyptian businessmen that Declaration and Spanish Foreign Minister Jose Manuel Garcia on the direction of Madrid to cancel warnings issued for tourists Spaniards not to visit Egypt, after meeting Dr. Mohamed Morsi would increase the number of tourists in Egypt, especially the Spanish tourists and Italians The Portuguese prefer to visit Egypt during the summer months.
He expected to recover tourism in Egypt during the coming period, coinciding also with the announcement of Japan and the direction of America for raising warnings to their citizens about traveling to Egypt, especially the French tourists and the English and the Americans prefer to visit Egypt in the winter. explains that the lifting of the embargo operations by these countries came to coincide with the visits of President Mohamed Morsy of Foreign 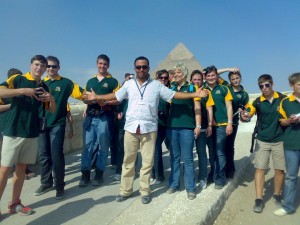 Affairs, as well as the recent visit to the city of Luxor, which gave a strong message to reassure tourists, the tourism sector in general. He points out that Spanish tourism to Egypt topping second place among European tourists coming to Egypt, especially in summer and thus will lead the remarks at the official level to the recovery of the industry, which is characterized by very sensitive.
It notes that the decline in unit sit-ins and demonstrations will lead to a return of confidence again in the Egyptian tourism, and therefore occupancy rates return to satisfactory levels.
And adds that the ratio of occupancies in the area of ​​the pyramid and reached to about 85% before the revolution, and then declined to about 10%, and during the last few days touched levels 30%, and is expected to climb to about between 50% and 60% during the months of October and November next. The data reveal the Central Bank of Egypt that the number of tourists to Egypt from EU countries arrived for about 584 thousand tourists during the month of June this year, compared to 604 thousand tourists during the month of May, about 691 thousand during the month of March.
The number of tourist nights reaching to about 6 million for the night during the month of June, compared to about 6.5 million nights in the month of May, and about 8.7 million nights in the month of April, the month of March, bringing the total tourist nights of European countries to about 7.1 million for the night.