The Egyptian museum in Cairo. Contains the largest collection of the effects of ancient Egypt, though the British Museum and the Louvre and the Metropolitan Museum (New York). Egyptian Museum and sits in the heart of Cairo’s Tahrir Square since 1906, The Museum Gallery contains the 136 A Pharaonic impact, in addition to hundreds of thousands of effects in warehouses.
The emergence and establishment of the museum 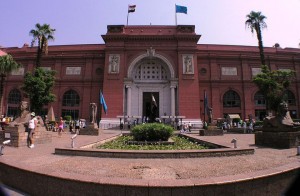 Egyptologist After deciphering the Rosetta stone at the hands of French scholar Champollion.

The core of the museum’s initial small house when old pond lockup where Muhammad Ali Pasha ordered registration of Egyptian Antiquities fixed and moving monuments value of the lockup and Museum in 1848.

In 1878 occurred in very high Nile flood causing flooding Bulaq Museum and the loss of some of its contents.
In 1881 re-opening of the museum and in the same year he died Mariette and his successor (Maspero) as Director of Antiquities and Museum.
In 1891 when the groups increased Bulaq Museum was transferred to Giza.
When the world came (de Morgan) as head of the interest and the museum has reformats these groups in the new museum, which was known as the Cairo Museum 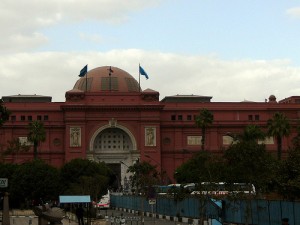 .
In the period of 1897 – 1899 AD came have Morgan successor.
But he returned Maspero again manages to interest and Museum of 1899 – 1914 AD In 1902 the transfer effects to the current building of the museum (in Tahrir Square) and was one of the most aides active in his tenure the second Egyptian scientist Ahmed Pasha Kamal, who was the first to specialize in Egyptian Antiquities old and worked for many years in the museum.
The first Egyptian director of the museum was “Mahmoud Hamza” was appointed in 1950.
This was the museum brief guide put Maspero dating to 1883 but he has done a great guide for the new museum under the prints and repeats of 1915 and so far (but with a series of amendments).

Egyptian Museum was designed by French architect in 1900, and the updated classic-style neo-classical style, which fits with ancient monuments and classic, but it does not compete with ancient Egyptian architecture that still exists.

It should be noted that the halls spacious interior and high walls. The natural light enters through the glass panels on the roof and windows on the ground floor. The central atrium in the museum is the highest part of the home where impacts are presented as they exist in the ancient temples. The length of the building that houses any future expansions, as commensurate with the requirements of the ease of movement of visitors from one room to another.
The most important museum collections

The museum houses a large number of Egyptian antiquities since prehistoric times until the end of the Pharaonic era, in addition to some Greek and Roman Antiquities, including:
published by: Egypt last minute tours, last minute holidays, deals, tours to Egypt, shore excursions