This year, it is expected that the number of tourists to the new number will remain a milestone in the history of the industry namely, one billion tourists.
According to the report of the World Tourism Organization, the tourism industry will continue to grow during 2012, albeit by less than in 2011, it will be the magic number is one billion tourists by the time of the year.
But before talking about tourism in 2012, the World Tourism Organization, through its report, which is known Balbaaromitr which measures if the tourism industry, said that the number of tourists increased by 4.4% in 1102 to up to 980 million tourists, after the figure was 939 million in 2010
The report pointed out that the distinction in 2011 specific features, the most important decline in global economic growth and the enormous political events in the Middle East and North Africa, earthquakes, natural, as in Japan.
And at the level of regions of the world, Europe was the best achievement growth rate of 6% with the observation that this old continent of no more than the growth rates in general to 5%.
The region of South America, part of the Americas region has achieved a leap as an exceptional growth rate increased to 10%. for more info here:   Alexandria airport

Unlike previous years, tourism in developed countries achieved growth rates higher than the most promising countries, or those on the path of growth, due, to the good results achieved by the European continent in general and to the setbacks suffered by the Middle East and North Africa.
Commenting on this, said Taleb Rifai, secretary-general of the World Tourism Organization that tourism has achieved exceptional levels of 2011 despite the difficult conditions encountered. And went on: For the industry directly responsible for 5% of GDP and 6% of world exports and employ one out of every 21 people in developed and developing countries alike, these results are encouraging and comes at a time when the world needs desperately to increase economic growth and create new jobs.
But what the barometer says report specifically?
The report indicates that despite the lack of economic recruitment, the number of tourists who have visited Europe in 2011 amounted to 503 million tourists, more than half the number of tourists in the world during that year (980 million tourists, the total number of tourists in 2011). The report pointed out that Europe accounted for 82 million tourists from the 14 million tourists who have increased globally in 2011 compared to a year earlier.
The Central Europe and Eastern Europe and the Mediterranean are located on the best in growth rates as it amounted to 8%. Has benefited European countries bordering on the Mediterranean Sea from the decline in tourism in the Middle East and North Africa because of revolutions known spring Arab countries also benefited from the influx of tourists from Scandinavia, Germany and the Russian Federation.
As for the Asia-Pacific, the rate of 6% growth in tourism which is equivalent to 11 million tourists in 2011 increased for 2011, bringing the total tourists who visited this region to 216 million. The rate of growth in Southeast Asia while it reached 9% in North East Asia 4%, but fell to 3% in Oceania (Australia and New Zealand), due to the number of Japanese tourists in particular.
The report noted that for the Americas has a growth rate of 4% which is equivalent to 6 million tourists in 2011 increased to a total number of tourists who have visited this region 651 million.
The area of ​​South America are growing up as the rate reached to 10% for the second year in a row while Central America and the Caribbean, where the growth has reached 4%, the same rate in 2010
And increased growth in tourism in North America, 3% for the number of tourists who have visited this region 100 million tourists in 2011
And maintained the African continent to the rate of growth achieved by bringing the number of tourists who visited it to 50 million people .. The Sub-Saharan Africa is the highest growth since the rate was 7%, which offset the loss incurred by the North African region, as was the decline in growth (-12%).
On the Middle East, the report noted the barometer of the World Tourism Organization to the region achieved a negative growth is (-8%), making it lose 5 million tourists in 2011, bringing the total number of tourists who visited it to 55 million people, has continued to several countries such as Saudi Arabia and the Sultanate of Oman and the UAE growth.
A statement issued by the organization to that there are countries that have achieved high growth rates, including the United States (12%) and Spain (9%) and Hong Kong Chinese (25%) and Britain (7%) The States spent the most on tourism was China’s growth rate (38 %) and Russia (21%) and Brazil 32%) and India (32%) and for the mature countries, the rates were spending less, for example, total spending on tourism Germany (4%) and American (5%).
After the report highlighted the results of 2011, go to the expectations of the experts who prepare the report of the barometer of what will happen in .2012
Experts have predicted that continued growth but at a slower pace, where the number of tourists will increase by between 3 and 4% to a historic number has not been achieved by a billion tourists by the end of this year.
They also forecast to recover emerging or promising economic submitted by States mature economically, and will be the growth rate the highest in the Asia-Pacific and Africa (4%) followed by the Americas and Europe (from 2 to 4%) The Middle East, experts predicted that the proportion of growth from zero percent to 5 percent, said the region will begin to restore part of the loss incurred in 2011.
These same expectations, confirmed by the confidence index, released by the World Tourism Organization, which indicated a committee made up of 400 experts from around the world to the tourism sector that will achieve positive results in 2012, but they believed that this growth will be lower than last year.
The World Tourism Organization has urged world governments to consider improving their capacity to facilitate the travel of tourists through the use of technology in the granting of visas of tourists quickly, as well as facilitate the writing of data and also the timing of the issuance of visas. The Organization confirmed that this improvement would increase the turnout of tourists to travel, which will lead to increased economic growth. published by:  Safaga port 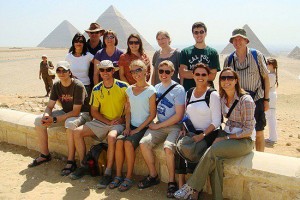