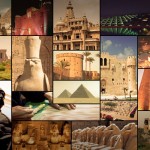 keenness of the Minister of Tourism Mounir Fakhri Abdel-Nour and Egypt’s ambassador in Berlin, Ramzi Izz al-Din, to visit the pavilion EgyptAir and praised the positive participation and effective participation of national companies in supporting the efforts of tourism both at the local, regional and international levels.

The company announced during the activities of the stock market, the latest tourist programs, a project leave Egypt Air, which offers a unique tourism programs in Egypt.
The pilot says Hossam Kamal, Chairman of the Holding Company for EgyptAir, that this project is one of the important projects, adopted by the company to promote tourism to Egypt, which helps support tourism plans and investment and enhance confidence in Egypt as a tourist destination is important.

The program covers a lot of information and services, which help customers to enjoy visits to Egypt and discover more of the important tourist destinations and areas of natural scenic areas of the existing tourist attractions in Egypt.
Said Jamal Hamad, chairman of EgyptAir Tourism and Duty Free, who headed the delegation of Egypt Air participating in the ITB Berlin that the company, which stretches back more than 60 years in the field of tourism and travel was keen to devote all of its expertise and long history to make this new project, which includes many of various tourism programs.

The pilot, Ayman Nasr Chairman of EgyptAir Airlines to Egypt Air are looking at Germany as one of the important points in its network as a result of mutual relations between the two countries as Egypt is one of those tourist important for tourists Germans, as well as a German center economically and financially important to the Egyptian Businessmen .

He insist that the company has contributed to an active role since the signing of the Air Transport Agreement initialed between Egypt and Germany on February 16, 1960 at boosting tourism and trade between the two countries through its direct flights to German cities different, where going EgyptAir currently 18 weekly flights directly to the German cities an average of 4 trips to Berlin and a daily flight to Frankfurt and Munich, this as well as codeshare agreement that was signed in 2007 between each of the two Egypt Air and Lufthansa, which provides for operating interoperability of all the trips the two companies from Cairo to each of the Munich and Frankfurt.