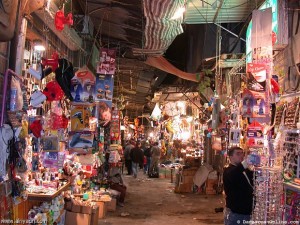 shopping tour in RIA and Skena market, it frequented by the poor and celebrities
Famous shops Moroccans and Jews to be inherited Egyptians
Market “Rue sixes”or “convalesce sixes”. Place his name like that, Atdgoa.
Alexandria’s most famous landmarks, and one of the features of the historic city and tourist shrines.
Known that market “Rue sixes” dating back to early last century
Making it the oldest shopping mall in Africa.
As it was in the beginning is a stables for horses British army,
After that turning Ahjrōh market stores for traders coming from Libya and the Arab Maghreb.
It was called “the Moroccan market”, then joined him Jewelry Market, and floss market
Which still sells Better and cheaper types of cloth and gained market “Rue sixes” named for the narrow streets and severe overcrowding and because most of the goods displayed belong to women, but the funny thing is that most sellers of men, and is a narrow lane and adjacent shops display goods women of every type and color.
.
Popular markets in Alexandria spread without interference from the province or disposal, the market has become compelling, and most of these markets have a historic status, all of them are due to ancient times, some or most of them established in the Islamic era and the Ottoman era, the most famous ..

Rue sixes market
Taken fame recipe World, as you find guests Alexandria from outside Egypt they know and ask to visit, some of them known to an earlier visit her, and some of them heard about or know them through films, is one of the remnants of markets Ottoman in the city of Alexandria, which has not undergone a major development, but in forms and views shops and the variety of goods on offer, but still in its old form in terms of narrow, extending this market in a range of narrow alleys parallel to the famous France street.
During your tour you will have lunch at local restaurant; finally you will be back to your hotel / Cruise.