Sign and the Egyptian Minister of Tourism, Mounir Fakhri Abdel Nour, to see Egypt in the coming tourist movement not seen in history before.

The minister said in a statement for “Arab. Net”, he was “very optimistic” as he put it, provided there will not be any events that might disturb the tourism in Egypt.

“There is great demand for Egypt Tours product, you will touch in the coming months of the summer season – winter for the current year.”
Increase from Japan and Spain

Asked about expectations for the coming period, Mr. Abdel Nour said he expected the return of the Spanish Tourism “summer cultural tourism, tourists usually go to the Spanish Luxor, Aswan and level areas in general.”

The minister expected a significant increase in the number of tourists from Japan, especially after the return flight line which connects Tokyo, Cairo, which is expected to double in the coming period.

A new air route will connect the city of Osaka Japanese Cairo, will be opened during the next few weeks, there is great demand by Japanese tourists on the Egyptian tourism product, especially after the success of the airline’s Tutankhamun Exhibition organized by the Ministry of Tourism in Osaka.

The minister expected to see Egypt

Egyptian tourist demand from Eastern Europe in general and in particular from Russia, Poland, due to the large increase in charter flights to Hurghada and Sharm el-Sheikh and Marsa Alam. 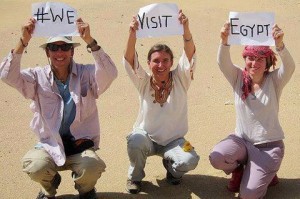 “It is also expected to increase the capacity of ad hoc charter flights to serve the Egyptian tourist destinations in the second half of 2012, coming from Germany and England, where he is expected to exceed what it was in 2010.”

He continued, “All these indicators make us optimistic that the next six months will see a return to greater rates of tourism will exceed what it was in 2010 much, provided they are not showing any events disturb these positive indicators.”
Beach and cultural

Asked whether the tourism in the coming period will focus on cultural tourism more than beach tourism, the minister ruled out completely this, asserting that coastal tourism represents 80% of Egyptian tourism.

He stressed that of course will increase cultural tourism due to the return of long Nile cruises that go from Cairo to Luxor and Aswan, “as the Ministry of Tourism is now working on upgrading of marinas along the Nile River Nile.”

The World Tourism Organization report in 2011 stated that Egypt holidays has left its position within the top 20 tourist destination in the world, which had reached in 2010.

The report added that “the years of political crisis in Egypt may pay from rank 18 to the rank of 16.

Egypt has received about 14 million tourists in 2010, while this number decreased significantly after the outbreak of the revolution of January 25, 2011 which was followed by year and a half years of political crisis and the subsequent related cases of insecurity.

Tourism is one of the most important sources of income for the Egyptian economy and the tourism sector works about 20% of the workforce in the country.