This critical report broadcast on TV  Reuters World and We publish a call from which wake-up call to save the area and the sea water and the city of Dahab in South Sinai tourism from collapse
And pollution after it was cleaner and the finest tourist resorts on the shores of Egypt, the Gulf of Aqaba, Red Sea ..

The report pointed out that the garbage domestic and trade are the scourge of the coast of Dahab, while the clean-up operations the ordinary Do not do much to stop the increasing piles of garbage that throw from the cottages, restaurants and hotels adjacent to the beach and those that rake the sea from ships and boats and coastal cities around the Gulf of Aqaba. He added that most of the garbage Ataathll completely, especially plastic ones, which makes them toxic to marine life.
The report noted in this connection to currently reside environmental projects to draw a map to save marine life. And follow through the impact of tourism and fishing on the various issues, such as the abundance and size of fish in the Gulf, which is located by the resort of Dahab.
The project aims to develop a database of scientific trustworthy private marine life so that he could assault marine scientists to develop strategies in the long term to maintain the local marine environment.
Lena says Milton station manager of the center of Dahab Red Sea environmental decline in the status of coral reefs in the Gulf, located by the city of Dahab and clearly visible, and that tourism is responsible and one of the basic problems. She said Nina Milton Reuters Television that there is a change in coral cover .. Hard coral cover in the sea, especially in shallow areas where there are many divers and swimmers who trample the surface of coral reefs .. There is no mention about coral cover in some of the surfaces of the coral reefs here .. So this big reason for the destruction of
The center is the Red Sea environmental cleanup operations under the water and on the coast and educational projects in collaboration with schools and local businesses and tourists to increase environmental awareness.
Said Nina Milton: The main problem is that many tourists do not know how to behave on coral reefs, and I imagine it would be useful if the shares Marshals diving and guides the use of CDs, breathing in the education of divers and swimmers and divers more on the environmental awareness and includes a list of volunteers involved in the project ecologists, researchers, in addition to divers interested in preserving the world of the deep sea. 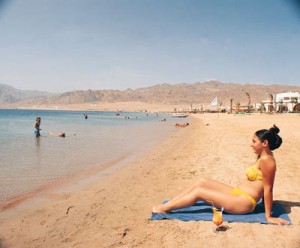 Will send data collected by divers in the Red Sea Environmental Centre in a survey of the marine environment to the Egyptian Environmental Affairs Agency. Said Nina Milton for TV Reuters too: we will send to the Environmental Affairs Agency, so they will use this data, but what we want to do also is to develop a management for everyone to know exactly how to act and what is happening in the Gulf and what the quality of marine organisms that we have a settlement here and what is important and not important, and that in order to have a sustainable tourism.
Reuters described the center as the environmental sea is a joint project with the Mary Mundie any U registered in Austria and other organization registered in Germany. Participated in the recent group of students from the Universities of Bonn and Zurich Center project in the Red Sea on the Gulf of environmental reality it resort of Dahab.
Finished the report and we say: Do you move the Ministry of Environment? Do you move the Ministry of Tourism? .. Will move South Sinai? .. Is it moving all the hardware and all the officials in Egypt?