Tourism return to the Red Sea once again 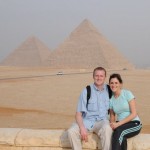 Egypt to enjoy their holidays and tours compared to the beginning of the year where the percentage of tourists coming to the hotels to maintain rates increasing over two months.

Also 12386 tourists arrived Sunday to Hurghada International Airport  from Russia on board 76 aircraft to spend two weeks in villages and tourist hotels in Hurghada and Safaga.

That there are definite expectations of the return of the last descent to become one hundred percent as was the situation before the revolution of January and the Chamber of Tourism to organize festivals and conferences in various countries of the world, what the impact on maintaining the affirmative and became a large turnout at the province by tourists.

The 11,094 tourists had left the province on board 75 aircraft destined to airports across Europe.

As for the domestic air traffic, the airport has received the 594 passengers on board 11 aircraft coming from Cairo International Airport for 563 passengers left on board to maintain 10 aircraft to Cairo.