I do not want to dive today in pain influence what is happening now in Egypt on tourism, as I said last week from London that the policy is inseparable from the economy, and what is happening in Egypt now for that model,
Again, going wherever the economy followed by tourism, so if the economy grew and prospered out of the people within the tourism
Home and abroad, but if growth falls, were overshadowed by the crisis on the economic situation, the wishing to travel and tourism they think a lot before deciding to travel and often are forced to stay in their country.
This is what happens in the world today because of the economic crisis that hit many of the regions of the world, especially Europe.
Has published the London Stock Exchange report on trends in travel and tourism in the world in 2011, pointing out that the global economy about to get depressed with the worsening debt crisis in Europe and the U.S. attempts to solve the crisis of rising debt, which has been facing for a long time, the report pointed out that the IMF International growth is expected to decline in the GDP of the world from 5.1% last year to 4% this year.
Of course, the report says will affect the number of tourists who travel around the world, where will decrease the number this year by 4.3% compared to last year, due to high fuel prices, commodities and tax increases and austerity measures taken by States, political turmoil and social unrest taking place in many countries the world.
The report points out that by next year is expected to reach the number of tourists to spend a billion people, nearly a trillion dollars (a trillion is equal to one thousand billion), thanks to increase the number of members of the middle class in emerging economic nations, especially in Asia.
Having thrown report provides an overview to the world, dealing with some of the world in some detail, and began the Americas, as pointed out that the economic recovery, there is accompanied by an increase in demand for tourism was among the factors that contributed to the increased growth in tourism is strong in 2010, but with an expected decline real GDP this year due to the high rate of unemployment, the number of tourists who visit the region of the world will fall, but visitors to the area of the countries emerging economies would support spending in that region. for more info here:   Safaga port

In the face of this economic problem, which lead to a reduction in the number of tourists from the Americas, either internally or externally took refuge in a number of tourism companies to devise new methods of marketing to attract tourists, including the so-called flight mysterious, which depend on the establishment of auctions given for visits to places is not advertised for their names, and enters wishing to travel to these auctions, and prices are very low, which is aimed at people the next two to marry, or celebrate their birthdays, where they are tempted to travel without mentioning the place of travel, hotel or otherwise, have started this phenomenon in 2006 and then multiplied. after that.
The prices start domestic flights than a thousand U.S. dollars, while prices of foreign trips start from $ 2500.
The report goes on to Britain, which have been allocated a separate part because the London market is being held in the British capital, is interested in the revitalization of tourism in Britain generally, the report pointed out that the IMF cut last September forecast for the growth of UK GDP from 1.8% of what was announced by to 1.1%, due to the financial crisis and rising unemployment, and the withdrawal of the British government fiscal stimulus measures provided by the institutions that are exposed to financial problems.
However, the report says London to host next year’s Olympics would increase the number of tourists to Britain, bringing the total to 30 million tourists, which will lead to support the British economy.
There are currently promotional campaigns to benefit most from the Olympics to London, especially in the British capital and the surrounding areas, and also in Britain as a whole .. Among the methods to convince people renting their homes, as well as their gardens for the establishment of tents spend the tourists who wish to follow the Olympics closely, the report pointed out that 80% of the parks have been leased for a period exceeding 28 days, is expected to increase demand for rental parks during the Olympics is the highest in Britain as a whole.
The hotel expects to increase prices 5 times the normal conditions during the Olympics, which will preferably wishing to follow-up 40% of the hotel room.
And the report considers the situation a tourist on the European continent, where indicates that with the slowdown in economic growth in the continent, especially the euro zone because of the sovereign debt crisis, and with the increasing rates of recession for more than 10% and the uncertainty about the future of the euro area, tourism will face a problem, especially in Spain, Ireland and Greece and Portugal, the countries most vulnerable to the economic crisis.
In an attempt to get out of this crisis, tourism, companies in Europe created a new kind of tourism is tourism luxury that make tourists choose the type of service provided to him, and also the need that the service is environmentally friendly and responsive per his wishes, and Germany is the State’s primary European in this area, followed by France .
In partnership with European companies, the tourism organizations in countries such as Kenya and South Africa, has developed special services and unique for this kind of tourism, luxury, which is usually in groups or Gerobac in terms of selection of places, and the need to confirm the conservation of natural resources and the environment.
Up and the report prepared by the London market for the travel and tourism to the Middle East, indicates that in 2011, exploded revolutions and unrest in the region amid calls for reform, and change regimes and violent conflicts broke out in some countries.
But it was so furans in the region, the report says its consequences on the tourism industry, where the expected sharp decline in the number of tourists visiting up to 6.6% growth.
As a result of this decline, began to Egypt and Tunisia in the re-marketing themselves as a tourist two democratic states have succeeded to some extent in the transition phase, while still the situation in Libya and Syria, far from being stable.
The report shows that the process of re-marketing of tourism through a new brand is a complex process because of the privacy of the political, economic and social development of each country, and because of the big challenges faced by each country.

The report says that the marketing of Egypt and Tunisia would be attractive especially for lovers of the Arab world but nevertheless, the rate of growth in tourism to Egypt and Tunisia during the period from 2010 to 2015 is expected to fall 3%.
However, the report indicates that despite the unrest, the region still represents a key market for tourism development due to its wealth of petroleum, and higher incomes for some of its population and population growth, it is also a Middle East have proven their ability to overcome the problems tourism.
For Asia, the report says, she lived a period of economic growth led by India and China in 2010, but this growth will slow this year, and the world the next because of the global economic downturn, the report points out that travel between the Asian countries  will deal with the growth of the number of members of the middle class in Asian countries, the Chinese will agree $ 57 billion on domestic and foreign tourism, which makes China the third country in terms of spending in the world after the United States and Germany.
Because of the increasing number of Chinese tourists, the international hotels have become interested in them, and trying to meet their demands, and the complexity of partnership agreements with Chinese companies and benefit from the cake of Chinese tourists, which increases continuously with the continued growth in tourism.
Is expected to increase spending on tourism for China to reach $ 67 billion in 2015 China became the second country after the United States. published by:  Egypt.travel 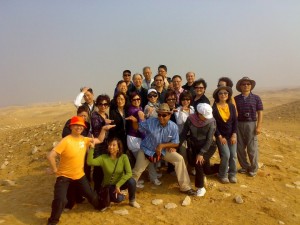