Pyramids of Giza or the pyramids of Egypt are located on the Tour of the pyramids in Giza on the west bank of the Nile. Built by about 25 centuries BC, between 2480 and 2550 BC. They include the three pyramids of Cheops, Chephren and Menkaure.

And the Pyramids are the tombs of ownership of each of which bears the name of the king who was buried where builders, and the hierarchical structure here is the stage of the development of cemeteries in the architecture of ancient Egypt. It started small crater turned to the underground chamber and then to several rooms topped by a terrace.

And then evolved to take the form of pyramid at the hands Eng Aamahotb Minister Pharaoh Djoser of the Third Dynasty. This was followed by two attempts of King Sneferu, founder of the Fourth Dynasty to build a full hierarchical form. But back pyramids are a peaceful form. And are located in Dahshur one oblate Qaeda and the other took a smaller form nearly half

the size of the first. The Engineer Hmeono able engineer of King Khufu to perform hierarchical ideal and the construction of the pyramid of Cheops in Giza, on an area of ​​13 acres and was followed by a pyramid of Khafre and Menkaure.
Bent Pyramid at Dahshur
Sphinx

Many people believe that the greatness of the pyramid lies in a constructive way, in fact, to talk this aspect of health, biggest example is Mount industrial weighs six million five hundred thousand tons, and is composed of stones each weighing twelve tons, almost these stones Paving and court settings to end half a millimeter, and this already deserves full admiration for the ancient Egyptian civilization. But it much larger, is one of the greatest puzzles faced since the beginning of human civilization. Many have claimed that just luxurious tomb of the king (Cheops), but the current era scientists believe that this view is ironic, has been building the Great Pyramid for a higher purpose and is much greater than that. The evidence for that is those facts amazing enjoyed by this great edifice which has been collected Charles Smith in the famous book (our heritage at the Great Pyramid) in 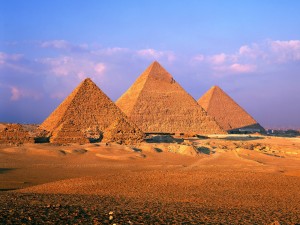 1864, Rising Pyramid multiplied billion equals 14,967,000 miles, the distance between the Earth and the sun, and orbit that passes through the center pyramid divides continents of the world into two equal halves completely, and that the basis of the pyramid divided by twice the height gives us a fixed number famous circuit (3.14) contained in calculators. And the four corners of the pyramid is heading to the four original trends in accuracy so amazing that some scientists to the presence of a small angle deviation from the original actors, but after the discovery of modern electronic devices to measure proved to be the corners of the pyramid is more correct and accurate.
A map of the Pyramids of Giza complex

scientists have noted that it contains a small circular gap does not exceed 20 cm in diameter. The archaeologists managed to learn the secret of the existence of such a gap after noticing very accurate, as it turns out that the sun’s rays enter through that gap only one day a year to the tomb of the pharaoh of completely. And even odder that this day and agree Pharaoh’s birthday.