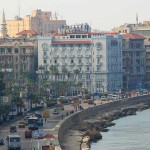 in supporting the Egyptian national economy .. After a lot of talk about the negative impact of recent events such as demonstrations and sit-ins on the low tourist bookings to Egypt in the next phase.

Prior to that, been associated with the decline after the revolution of January 25 .. And that all these events led to the decline in international tourist traffic coming to Egypt and the impact on the national economy.

The reason for this of course is that tourism, not only grow in the presence of stability and security, and therefore their absence with the absence of tourism and thus also lose the national economy, an important tributary of the tributaries of the support of hard currency, and provide jobs for citizens.
From here say that it is useful to recall from time to time the economic importance of tourism.
The figures indicate that tourism in Egypt is following in support of the national economy.

49.2% of services exports (exports of services in the first / second of exports)
20.0% of foreign exchange
11.3% directly and indirectly, of the gross domestic product
2% of the total implemented investments
7.8% of the investment in the services sector
25% of the total proceeds of taxes on services.
3.4% of the total proceeds of the sales tax (2.9%).
2.1% of the total proceeds of taxes on income (1.7%)
2.3% of the total proceeds of tax revenue (1.9%).
Egypt’s share of global tourism market, 2010:
The center 18 of the top 50 global tourist destination
Ranked first among the countries of the Middle East.
Ranked first among the countries of North Africa.
First place in the continent of Africa
22.7% of tourism revenues in the region of the Middle East
1.5% of global market share.
Employment in tourism:
The number of tourism directly employed about 1.4 million people in 6.8,2009% of total employment (1.5% wttc in 2011)
Paid workers is about 70% and the remainder are engaged on their own
97% of male employment.
Number of employees the services of accommodation and food and drink make up more than 40%
Remaining in the activities of different types of transport / goods and services Special / Tourism companies and travel agencies.
Total employment directly and indirectly more than 3 million people 12.6% of total employment.
Tourism is an activity, then:
Of the most important sources of foreign exchange generated by the tourism expenditure of income.
Provides new job opportunities.
Tool to raise the standard of living of the individual and the reduction of poverty.
Has a clear role in the development community.
A means of integration and the integration of population border provinces.
Contributes to the net taxes on products.
Indirect effects and updated through related industries