in an effort to increase incoming tourism to Egypt is considering the Egyptian General Authority for Tourism Promotion several proposals for the development of tourism in the coastal city of Port Said, which fell to the inbound tourism significantly from both inside and outside the country.

It is worth mentioning that Port Said Port is considered the base station for ships and yachts cross the Mediterranean Sea, where ships dock by most for a day or two days during which the tourists get off to the city and the roaming, which contributes significantly to the movement of trade boom shops and restaurants there.
The head of the sector of domestic tourism Authority, Magdy Selim that official statistics indicate a significant reduction in the number of ships calling at Port Said Port since the events of the revolution on January 25, where the number of ships coming to port in 2011 (76 ships) compared to 161 ships in 2010, and continued decline in the number of ships in the first half of this year, where a ship of 28 to 31 ships at the same time period of 2011. more info click here: Egypt holidays
According to official statistics to the decline in the number of visitors coming to the province in 2011, reaching about 95 thousand visitors compared to about 231 thousand visitors in 2010, in addition to the number of visitors during the first half of this year, which amounted to about 38 thousand visitors for about 40 thousand visitors During the first half of 2011. 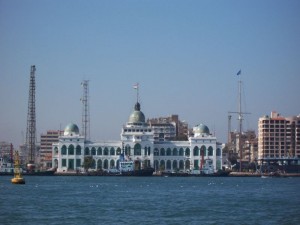 The sound that the events match Ahly and Almasri , which took place in Port Said last February also affected the movement of domestic tourism to maintain that famous tourism shopping in the holidays, especially weekends and summer resorts, which had a negative impact on occupancy rates in hotels and tourist villages and the movement of the boom tourism in general.

As part of efforts to restore the movement of incoming tourism to Port Said to their normal level, applied toxicity Jabr, General Manager of Greater Cairo and the Suez Canal in the body, and Omaima Wali, Director of the Bureau of the Commission in Port Said, a number of proposals that would highlight the tourist attractions in Port Said, such as the speed of completion of the renovation the museum National conservation and exploitation of de Lesseps statue tourism and tell the story of the Suez Canal in the form of sound, light and convert the old Port Said lighthouse to a tourist attraction after its restoration, in addition to the preparation of the agenda for the tourist province recorded the most important holidays and special occasions with.

With regard to the course of the Suez Canal in Port Said, proposed algebra and Wally complete feasibility studies for the establishment of a yacht marina and the establishment of breakwaters on the shores of Port Said and Port Fouad, in addition to the exploitation of the Suez Canal in the course of work trips freely. Published by:   Port said shore excursions