and column masts, etc., Alexandria has a population of about 4,123,869 inhabitants (Census 2006) work activities, commercial, industrial and agricultural. Divided into Alexandria to six administrative districts is the neighborhood park, East District, neighborhood center, west district, district customs, Amariya, contain these neighborhoods in 16 sections of 129 Xiahe, In addition to the major cities subordinate to it such as the city of Burj Al Arab and Burj Arab new.

Began work on the establishment of Alexandria by Alexander the Great in 332 BC. M from the road bridge is part of the water separating the island extended to the coast, the principal called the “Pharos” the port outdated, and a small village called “Raktos” or “Racodh” surrounded by small villages other spread as well as between the sea and Lake Mareotis, and taken by Alexander the Great and his successors as the capital of Egypt for nearly a thousand years, until the Islamic conquest of Egypt by Amr Ibn El-Aas year 641, known Alexandria in history through a variety of parameters such as the ancient Library of Alexandria, which included more than 700.000 folder, and the Lighthouse of Alexandria, which were considered of the seven wonders of the world, ,to the enormous height of up to about 35 meters, and the lighthouse remained in existence until destroyed by a powerful earthquake Year
1307
Recreational areas
Sayed Darwish Theatre or the Opera House in Alexandria.
The role of cinema and theater

Alexandria has a lot of cinemas are available in various neighborhoods, such as cinema Rialto, Rio, Prince, Metro, Renaissance, Ferial, radio, Strand, and the Cinema of San Stefano, In addition, there are many theaters, such as Sayed Darwish Theatre or Opera 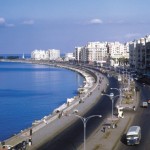 Includes Alexandria as well as many sports clubs and entertainment venues such as Club Olympic Club, Sporting Club, Heliopolis, Al Ittihad of Alexandria, Hunting Club, Club tram, Club Lagoon Club, Acacia, in addition to many social clubs confined sectors of particular functional and which are fulfilled mostly on the Corniche Alexandria next to each club such as doctors, engineers, club, club teachers, the Judges Club, Club Bar, Club and Association business,
Shopping centers and casinos
San Stefano Grand Plaza on the coast of Alexandria.

Side of the Montazah Palace Gardens.

Includes the city of Alexandria several public parks, such as gardens park property, a group gardens surrounding the Palace of Montazah a royal palaces of past and an area of 370 acres and contains trees as diverse as palm and others, and a group of flowerbeds also includes a museum and beaches for bathing, Khaljana natural and tourist center integrated and includes hotel and restaurants and chalets, and a children’s park on an 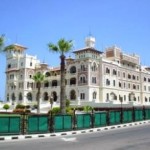 area of 4.5-acre and there is a garden park Palestine Hotel, and a center for marine sports, in addition to the gardens park there are also gardens, waterfalls, gardens and palace Antoniadis and containing trees, flowers and statues of marble designer-style Greek and the Palace Antoniadis garden, picnic, and the International Garden .
Insufficiency
Montazah Palace.

Palace Park: This is one of the royal palaces in the city, was built by Khedive Abbas Helmi II in 1892, with an area and the gardens about 370 acres and consists of several buildings, one of the royal palaces of past and houses a museum of Titles of ownership, and includes in its courtyard palaces are the Palace Alslaof Palace sumptuous.
Palace of Ras El Teen: the oldest palaces in the city, one of the historical monuments and archaeological sites in Alexandria, and saw this palace the end of Dynasty top in Egypt when the saw off of King Farouk, and he left him to his exile in Italy on board the royal yacht unguarded, and the Palace is now one part of the presidential palaces in Egypt.

And other deficiencies in the city: Antoniadis Palace, Palace of Safa.

The column masts of the most famous monuments in Alexandria, built on a hill between the door of Sidra area and the current Muslim cemetery known as the “cemetery” column and the plateau com Alhqavp archaeological sites, and a length of about 27 meters. Held the column in honor of the Emperor Diocletian in the third century AD, the last vestiges from the Temple of the Serapeum set up by Emperor Bustumus and is considered the highest monument in the world, [57] and was told that this column dedicate to Christianity after its victory in Alexandria. [58] body of the column is a one-piece, with a overall height 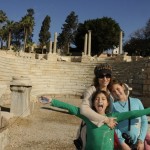 has, including the rule about 26.85 meters, On the west side of the column bases are accessible to them peace under the ground and there are two statues are similar to the Sphinx made of granite pink dating back to the era of Ptolemy VI.
Column mast, and a statue of the Sphinx-like granite.
Bey Citadel

Located Bey Citadel in the sea most of West Alexandria, and was built in the old site of the Lighthouse of Alexandria, which was destroyed in 702 AH, the impact of the devastating earthquake that happened in the reign of Sultan al-Nasir Muhammad, has begun to Sultan al-Ashraf Abu Al-Nasr Bey building this castle in the year 882 AH and ended 884 years of building E, and the reason for his interest in Alexandria, the large number of direct threats to Egypt by the Ottoman Empire, which threatened the entire Arab region.
Bey Citadel.
Roman Theatre

Roman theater is located in the Kom El-city center, is one of the effects of the Roman period has been his residence at the beginning of the fourth century AD, . A Roman theater only in Egypt discovered this site accidentally while removing the dirt to search for the tomb of Alexander the Great by the Polish mission in 1960, called archaeologists name of the Roman theater at the discovery of scores marble, but erupted great controversy about the function of this building, archaeological, The exploration took him about 30 years.
Roman theater.
New Library of Alexandria

located on the Mediterranean coast in the Shatby, and has more than 8 million books, and the library is the current revival of the old library, which was the largest libraries of its time, and believes that Ptolemy II is of an order founded in the early third century BC, and the number of books which are contained in a folder has reached 700.000.
New Library of Alexandria
Eastern Harbour

The Eastern Harbour in Alexandria, in general, one of the oldest ports on the Mediterranean, includes the eastern port areas Shatby station and sand and Mansheya and sea, was Alexander the Great target from behind the foundation of the city create a new port occupies a prominent place in world trade after the shattered port of Tyre on his way to Egypt, as well as the establishment of a new port Ahidvh great link between the old world and the country’s eastern harbor.
Eastern Harbour.
Tombs of Mustafa Kamel Archaeological

Located cemeteries Mustafa Kamel in the region of Mustafa Kamel, and that is called by that name, and consists of four tombs carved all in the rock, has carved graves first and second under the surface of the earth, and the cemetery, the third and fourth goes up part of it above ground, has been detected This group of graves by accident between 1933 and 1934, These graves date back to the late third and early second century BC, and specifically to the Greco-Roman.
The altar inside the inner courtyard of the tomb .
Al Anfoushi ancient tombs

Located cemeteries Al Anfoushi in the sea west of Alexandria, dating to the third century BC, specifically around the year 250 BC., Ie in the late Ptolemaic and early era of the Romans. discovered these tombs in 1901 where he discovered the two buildings Jnaizaan respective Mcyprtan , and then rolled discovery of the Tomb of Al Anfoushi until the number of funerary buildings of five buildings, and there is building funeral sixth disappeared and no 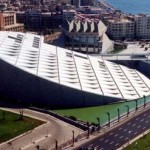 longer has an impact at the moment, and the advantage of these tombs decorated with beautiful Alfrsco, has many of them decorated in marble and marble.
Scene depicting the deceased in the afterlife in the presence of Isis and Osiris and Horus at the entrance to a cemetery.
Com Alhqavp ancient tombs

Located graves com Alhqavp in the com Alhqavp South neighborhood Mina onions, and one of the most important tombs of the city, and named the area by that name because of the many remnants of pottery and stone quarries that were piling up in this place, The importance of the cemetery due to the breadth and the large decoration and complexity of planning, it is also of the clearest examples of the overlap of Pharaonic art Roman art in the city and the finest models of architecture Ganasais, and found the cemetery by accident on September 28, 1900, despite the fact that drilling had begun in this area since 1892.
Image from within a cemetery
Shatby ancient tombs

This cemetery is located between Port Said Street and Corniche Road area Shatby in the face of St. Mark’s College, were discovered by accident in 1893 also, and return to the end of the second century and the beginning of the third century BC. Cemetery carved from the rock, and found out a lot of the effects of the Ptolemaic period is the most important statues Altnajra, are the graves of the oldest cemeteries in Ptolemaic Alexandria to its existence outside the walls of the old city.
An overview of the tombs of Shatby.
Alexandria National Museum

Is a museum of Alexandria, located in St. Fouad in the city center, featuring more than 1,800 artifacts representing all ages that have passed by the city from Roman times to the modern era, the museum is a former palace of a Timber Traders wealthy in the city, has created in the style of architecture, Italian, and the sale in 1954 the U.S. Consulate, and was bought by the Supreme Council of Antiquities of Egypt $ 12 million Egyptian pounds, which is surrounded in turn to the national museum of the city, and the Egyptian President Hosni Mubarak inaugurated on September 1, 2003.
Interface of the museum.
Greco-Roman Museum

A museum effects in Alexandria, inaugurated by Khedive Abbas Hilmi II on October 17, 1892, The museum displays a wide variety of effects that were found in Alexandria and Sheba, most of which the effects of the Ptolemaic and Roman times subsequent to him, and particularly since the emergence of Alexandria of the century BC to third century AD.
Interface of the museum.
Royal Jewelry Museum

Jewelry is a museum displaying the royal family that ruled Egypt. Palace was built in 1919 in the Zizinia, an area of about 4185 square meters, and was the property of the Princess Fatima Zahra one of the princesses of the royal family, has been designed according to the European style buildings in the nineteenth century. Turned the palace into a museum of the Royal Jewelry in 1986, which included a wide range of gold jewelry and artifacts of the royal family belonging to the upper in 1805.