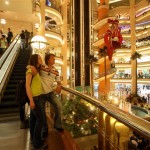 shopping tour in City Stars Mall, it is a shopping center was opened in December 2004. Located in Nasr City, which is the first integrated development project of its kind in the Middle East and Africa, the largest shopping mall in Egypt.

The infrastructure of the Mall sophisticated and equipped networks and multimedia and customer services as well as 6000 facility for vehicles to ease parking in the indoor completed design elements of the project and displays what is not seen in the selection of entertainment, retail and combines a group of leaders that is unsurpassed and trade names in one place.
City Stars Mall Cairo landmarks and consists of:
Three hotels that offer more than 1,500 rooms and suites
Element shopping and entertainment center
Medical Center

Inter Continental:  Inter Continental City stars and twice winner in the business and the award-winning best hotel in Cairo is the largest Intercontinental Hotel in the world which offers 790 rooms and suites hotel also offers:
World-class restaurants and lounges, a cafe and casino Hua largest restaurants in the Middle East Club health and fitness studio and massage rooms, hydro pool, tennis court, squash courts, steam rooms and sauna.
Business center, meeting rooms and wireless data connection and access to high speed Internet (wirless) and executive suites.
The largest ballroom in the Middle East with $ 2200 Council for guests
19 multi-purpose hall and conference rooms.
Holiday Inn: Holiday Inn City stars offers 330 guest rooms, a sophisticated document to the workplace and entertainment where both the hotel offers:
3 restaurants and lounges bar, health club and heated swimming pool in the outdoor
Business Center and wireless connectivity to data high-speed Internet connection (wirless)
Stay Bridge Suites: is the third City stars hotels have been built in accordance with the best international standards and innovative concept, the first of its kind in the Middle East and Africa. Each suite hotel designed for anyone who wants an alternative to traditional hotels and offers original and new services allow guests to continue their normal lives when they are away from home and consists of 50 single bedroom 38 double bedroom and 10 three rooms apartments and 8 sheds.

Commercial market:
Is the largest of its kind in the Middle East in the space rental of 150,000 square meters and the first African and Arab and after the Jerusalem Center in Algeria and consists of 7 levels and has a complex Cinemas of 21 display also has Hypermarket (Spence) were also provided the following: 7 entrances and exits on 3 main streets and parking spaces yellow taxi (Taxi capital). All over the mall spread display LCD to clarify promotions and display pictures of missing children also show the procedures in case of emergency … Etc.. In addition to changing rooms and chapels for males and females in each floor.

During your tour you will have lunch at local restaurant, finally you will be back to your hotel / cruise.