Abu Simbel is an archaeological site includes two huge rocks temple in southern Egypt on the western bank of Lake Nasser about 290 km southwest of Aswan. It is part of the UNESCO World Heritage Site known as the “Monuments of Nubia”, which starts from the direction of the flow of the river from Abu Simbel, to Philae (near Aswan).
more info click here: Egypt last minute tours, last minute holidays, deals, tours to Egypt, shore excursions

Double temples were originally carved out of the mountains in the reign of King Ramses II in the 13th century BC, as a lasting monument to him and to Queen Nefertari, to commemorate his victory at the Battle of Kadesh. However, in 1960 was transferred 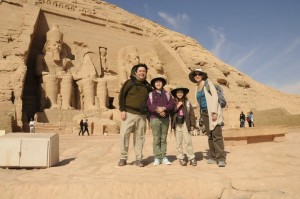 complex installations college elsewhere, on an artificial hill made of the structure of the dome, and a reservoir of the Aswan High Dam.

It was necessary to move the temples to avoid being drowned through the creation of Lake Nasser, and pose huge artificial water reservoir after the construction of the High Dam in Aswan on the Nile River.

Began building the temple complex at about 1244 BC and lasted for almost 21 years, until 1265 BC. Known as the “Temple of Ramses” beloved by Amun “, and it was one of six rock temples in Nubia, which took place during the reign of Ramses II. Their purpose is signed influence of neighboring countries in southern Egypt, and also to enhance the status of Egyptian religion in the region. Historians say that the design Abu Simbel expresses something of the pride of Ramses II. Differ Abu Simbel listed on this page for Abu Simbel displacement, which is an extension of Abu Simbel tourist, but it is about 366 kilometers south of Aswan